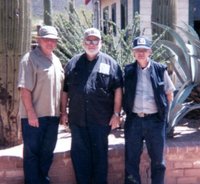 Charles (Butch) M. Nye, Jr., 71 of Merritt Island, Florida passed away on Sunday, May 27th at Cape Canaveral Hospital. Butch was born in Washington, D.C. on 02 February 1947. Butch was a retired welder and ironworker. He was a good son and brother. He took care of his family. Butch loved country music, western and action movies and the casino slots. He is pictured standing between his brothers Buster and George on their cross country trip in 2000. Butch was preceded in death by his parents, Charles Sr. and Agnes Catherine Nye of Maryland and his sister, Ann Watson of Merritt Island. He is survived by his brothers, Walter (Buster) and George Nye as well as his former brother-in-law, Donald Watson. Butch will always be with his family.