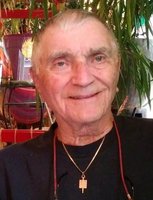 It is with deep sorrow that we announce the unexpected passing of our beloved father, step father and grandfather Roland Touzeau Martin III at his home in Melbourne, Florida at the age of 87. Roland was born on December 5, 1931 on his grandmother’s ranch outside Lewistown, Montana, to Roland Touzeau Martin II and Arlene Josephine Fritsen. He attended Ferguson County High School in Lewistown. After graduating, he joined the U.S. Air Force and was stationed at Tyndall Air Force Base in Panama City, Florida, where he met and married Frances Joyce Powell. He received his bachelor of arts degree at Florida State University and his master’s at Birmingham Southern College. He graduated Phi Beta Kappa. Roland was particularly proud of this accomplishment. He moved his family to Eau Gallie, Florida and began his career as a teacher at Melbourne High School. He later transferred to Eau Gallie High School where he was employed until his retirement. With his second wife, JoAnn, he enjoyed travel and cruises. He liked experiencing new cultures, trying different kinds of foods and learning new languages. Roland is survived by his brother, Frank Martin, his children, Roland T. “Raleigh” Martin and wife Shirley, Keith Martin and wife Manuela, Kristina Daugherty and husband Rick, and by his step children Bryan White and wife Beth, and Jody White. He leaves behind eight grandchildren, Ryan, Kyle and Karin Martin, Niels and Sven Martin, Madison and Cody Daugherty, Bry White, and one great-grandson Nolan Martin. We will miss him and his dry sense of humor.