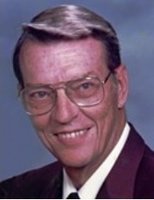 Philip William Hampton, 87, retired Rocket Scientist and Guinness Book World Record holder, died at home on Sunday, November 4, after a long life well lived. Phil was born 1 July 1931 and spent his early years in Chetek, Wisconsin. He served in the USAF from 1950 to 1954 as an airplane mechanic and flight engineer. He received a BS degree in Aeronautical Engineering from Northrop Institute of Technology in California, and later a Master of Science degree from the University of California. Following graduation from NIT in 1958, Phil was employed by Rocketdyne in Canoga Park, CA. This initiated a career lasting over 31 years in liquid rocket engine engineering development and launch operations. Over his career he worked on the Thor, Atlas, and F-1 missile engines. He was involved in the initial Thor and Atlas rocket launches from Vandenberg AFB and the F-1 engine powered the Saturn Apollo vehicle that took men to the moon. When the Space Shuttle Main Engine (SSME) contract was awarded to Rocketdyne, Phil was immediately assigned to that program and he worked with the SSME until his retirement in 1988. In 1957 Phil met Grace Hamblin on a blind date. It was love-at-first-sight and 10 weeks later they were married. It was a life-long love affair that lasted 61 years. They moved frequently following Phil’s job assignments to various cities in California. While in Lompoc their daughter Wendy Kay Hampton was born in 1961. In 1974 he was assigned to Huntsville, AL as Resident Engineering & Simulation Lab Manager, responsible for SSME software testing and development. In 1984 Phil and Grace moved to Merritt Island, FL, where Phil was SSME Engineering Manager at Kennedy Space Center overseeing Shuttle launches. He finished his career there, retiring in 1988. In 2002, they moved to Orlando to be closer to Wendy and her family. A recipient of many honors and awards, Phil was most proud of his Silver Knight of Management and his Silver Snoopy Award from the Shuttle Astronauts. During the 1960’s Phil’s main hobbies were camping and competitive pistol shooting, until he tried SCUBA diving in 1967. He logged a total of over 2950 dives. He was also an avid underwater photographer and enjoyed sharing his experience and expertise with others. He was a member of both the KSC Barracudas the Martin Dive Clubs. In 2007 Phil was elected to the Homeowner’s Association at The Preserve of Rio Pinar. In this capacity he worked to keep the neighborhood functioning smoothly and beautifully maintained. He cared deeply about the service he provided and the many friendships he developed. Phil is survived by his wife of 61 years, Grace, his daughter Wendy Hampton McCleskey, his son-in-law Mike, his grandson Torey (New York, NY), and his brother Robert Hampton (Sacramento, CA). A Celebration of Phil’s life will be held Sunday, 11/11, at the First Unitarian Church of Orlando, 1901 E. Robinson Street, Orlando, at 3:00 PM. To honor Phil’s love of the ocean, it would be appropriate to wear a fish shirt or tropical print. A reception will follow. In lieu of flowers, donations can be made to the American Cancer Society or the Ocean/Wildlife charity of your choice .