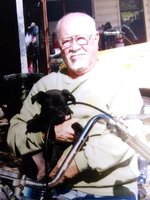 Milton Rodriguez-Rosado was born June 11, 1936 to Abraham and Bienvenida Rodriguez in Mayaguez, Puerto Rico. He relocated to New York at the age of 12. He enlisted in the United States Air Force in 1954 at the age of 18 until 1957. During his three years in the service, Milton was stationed in Colorado, Maine and Tampa, Florida. Milton returned to New York where he met his love Lucy Cuevas. They married in 1961 and had two beautiful children: Richard and Debbie. While in New York, Milton was a truck mechanic for most of his life. He had a love of cars and motorcycles and spent his time building or rebuilding both as that was he loved to do. He also loved to race his Corvette and bikes. Milton and Lucy would often spend their weekends on his Harley Davidson, as part of the motorcycle club named the Unknowns, riding wherever the road took them. He loved riding free and fast. Milton and his family moved to Melbourne, Florida in 1979 where he continued to work on cars and motorcycles. He was preceded in death by his son, Richard Rodriguez and leaves behind his loving and dedicated wife, Lucy Rodriguez and his loving and devoted daughter, Debbie Rodriguez along with his sisters Sylvia Colon (Samuel) and Alicia Rodriguez as well as numerous nieces and nephews who will always remember him as the greatest “GREASE MONKEY” in the world.