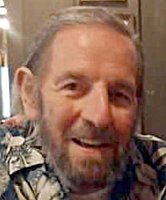 Donald “Sam “ H. Everett, 83, of Palm Bay, Florida, formerly of Reeders, Pennsylvania, passed away on Thursday, Febuary 6, 2019, at the Indian River Center in West Melbourne, Florida. He was preceded in death by his loving wife Madeline “Madge” Everett on Nov. 3, 2018. They had celebrated their 51st Wedding Anniversary on Oct. 15, 2018. He was born in Reeders, Pennsylvania in the house he was raised in. He was the son of the late Norman Anson Everett and the late Mabel Ardella Everett (Singer). He lived the majority of his life in Reeders before moving with his wife to Palm Bay, Florida for health reasons in May of 2017 A devoted husband, father, grandfather, uncle and friend, he truly loved and enjoyed his family. Sam enjoyed NASCAR, football, hunting, collecting, especially stamps, horses, racing and driving his Corvettes, of which he owned several during his life, attending his grand children’s many activities, listening to country music and “Country Living”. He was a true “Country Boy”. He was also an avid story teller and loved to share his tales and adventures with family and friends. Sam was a graduate of Pocono High School in Tannersville, after which he served proudly in the United States Army, much of that time stationed in the Philippines. A proud Veteran he enjoyed his time in the Army and serving in the Philippines, and reminisced about it often. Sam worked for many years at the Monroe County Surveyor’s office as a Cartographer and Surveyor. Other jobs he had included Lift Operator at Camelback Mountain Ski Area, bar tending at local pubs, demonstrating and selling farm and heavy equipment, and finally retiring from Consolidated Freightways in Pocono Summit where he had worked for over 16 years. Sam was a longtime active member of Carrie’s Hunting Club of Reeders, where he loved hanging out with his friends. He was a member of American Legion Posts in both Gilbert, Pennsylvania and Palm Bay, Florida. A big NASCAR Fan, he was one of the original surveyors for the Pocono Raceway in Long Pond, Pennsylvania. He was also a Track Official at Watkins Glen International Racetrack in New York for many years. He was a lifetime member of the NRA He was a member of The Reeders United Methodist Church. Preceding him in death, in addition to his wife and parents was his grandmother, Minnie Singer (Buskirk) who was an influential part of his early life. He is survived by his daughter, Sharon Beehler and her husband Kevin of Tobyhanna; sons, Chad Everett and his wife Dawn of Reeders and Todd Storm of York; grandchildren, Carlee Beehler, Kelsey Hovi (Beehler), Brandon Everett, Jacob Everett, Ryan Schaller, and William Storm; many nieces, nephews and cousins Private cremation was entrusted to the Ammen Family Cremation and Funeral Care of Palm Bay, Florida. A gathering for family and friends will be held from 1 p.m. until the time of service on Sunday March 10, at Yanac Funeral and Cremation Services Inc., 35 Sterling Road, Mount Pocono, Pennsylvania. The Rev. Richard E. Czachor will conduct a prayer service at 3 p.m. Sunday at the funeral home. Private interment for Sam and his wife Madeline will be held at a future date at the Indiantown Gap National Cemetery in Annville, Pennsylvania. In lieu of flowers memorial donations may be made to the West End Memorial American Legion Post 927, 646 Fairgrounds Road, Gilbert PA 18331.